The Next Big Planet-Changing disaster 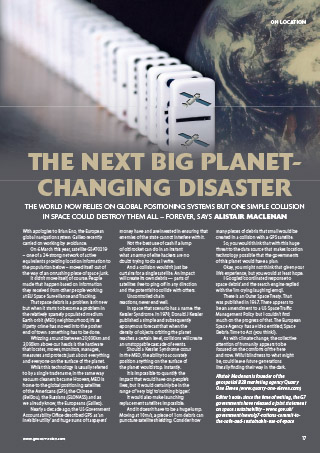 On 6 March this year, satellite GSAT0219 – one of a 24-strong network of active equivalents providing location information to the population below – moved itself out of the way of an onrushing piece of space junk.

It didn’t move itself, of course. People made that happen based on information they received from other people working at EU Space Surveillance and Tracking.

That space debris is a problem isn’t new but when it starts to become a problem in the relatively sparsely populated medium Earth orbit (MEO) neighbourhood, it’s as if petty crime has moved into the posher end of town: something has to be done.

Whizzing around between 20,000km and 3,000km above our heads is the hardware that locates, moves, monitors, manages, measures and protects just about everything and everyone on the surface of the planet.

Whilst this technology is usually referred to by a single tradename, in the same way vacuum cleaners became Hoovers, MEO is home to the global positioning satellites of the Americans (GPS), the Chinese (BeiDou), the Russians (GLONASS) and as we already know, the Europeans (Galileo).

Nearly a decade ago, the US Government Accountability Office described GPS as ‘an invisible utility’ and huge sums of taxpayers’ money have and are invested in ensuring that enemies of the state cannot interfere with it.

Not the best use of cash if a lump of old rocket can do in an instant what an army of elite hackers are no doubt trying to do as I write.

And a collision wouldn’t just be curtains for a single satellite. An impact will create its own debris — parts of satellites free to ping off in any direction and the potential to collide with others.

In space that scenario has a name: the Kessler Syndrome. In 1978, Donald J Kessler published a simple and subsequently eponymous forecast that when the density of objects orbiting the planet reaches a certain level, collisions will create an unstoppable cascade of events.

Should a Kessler Syndrome occur in the MEO, the ability to accurately position anything on the surface of the planet would stop. Instantly.

It is impossible to quantify the impact that would have on people’s lives, but it would certainly be in the range of ‘very big’ to ‘nothing bigger’.

And it doesn’t have to be a huge lump. Moving at 10m/s, a piece of 1cm debris can puncture satellite shielding. Consider how many pieces of debris that small would be created in a collision with a GPS satellite.

So, you would think that with this huge threat to the data source that makes location technology possible that the governments of this planet would have a plan.

Okay, you might not think that given your life’s experience, but you would at least hope.

I Googled ‘coordinated response to space debris’ and the search engine replied with the ‘I’m crying laughing’ emoji.

There is an Outer Space Treaty. That was published in 1967. There appears to be an amendment to a US Space Traffic Management Policy but I couldn’t find much on the progress of that. The European Space Agency has a video entitled, Space Debris: Time to Act (you think?).

As with climate change, the collective attention of humanity appears to be focused on the comforts of the here and now. Wilful blindness to what might be, could leave future generations literally finding their way in the dark.

Return to the Homepage