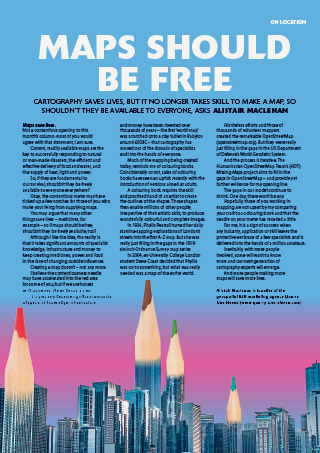 Maps save lives is not a contentious opening to this month’s column: most of you would agree with that statement, I am sure.

Current, readily available maps are the key to successfully responding to natural or man-made disasters, the efficient and effective delivery of food and water, and the supply of heat, light and power.

So, if they are fundamental to our survival, shouldn’t they be freely available to everyone everywhere?

Okay, the contentious meter may have ticked up a few notches for those of you who make your living from supplying maps.

You may argue that many other things save lives – medicines, for example – so if maps should be free, shouldn’t they be freely available, too?

Although I like the idea, the reality is that it takes significant amounts of specialist knowledge, infrastructure and money to keep creating medicines, power and food in the face of changing outside influences.

Creating a map doesn’t – not any more.

I believe the contentiousness needle may have accelerated into the red area for some of you, but if we are honest with ourselves, the evidence is clear.

It is precisely because significant amount of specialist knowledge, infrastructure and money have been invested over thousands of years – the first‘world map’ was scratched ontoaclay tablet in Babylon around 600BC – that cartography has moved out of the domain of specialists and into the hands of everyone.

Much of the mapping being created today, reminds me of colouring books.

Coincidentally or not, sales of colouring books have seen an uptick recently with the introduction of versions aimed at adults.

A colouring book requires the skill and practised hand of an artist to create the outlines of the shapes. Those shapes then enable millions of other people, irrespective of their artistic skills, to produce wonderfully colourful and complete images.

In 1936, Phyllis Pearsall turned her daily stamina-sapping explorations of London’s streets into the first A-Z map.

In 2004, ex-University College London student Steve Coast decided that Phyllis was on to something, but what was really needed was a map of the entire world.

His tireless efforts and those of thousands of volunteer mappers created the remarkable OpenStreetMap (openstreetmap.org).

But they were really just filling in the gaps in the US Department of Defense’s World Geodetic System.

And the process is iterative.

The Humanitarian OpenStreetMap Team’s (HOT) Missing Maps project aims to fill in the gaps in OpenStreetMap – and provide yet further evidence for my opening line.

The gaps in our model continue to shrink.

One day, there won’t be any.

Hopefully, those of you working in mapping are not upset by my comparing your craft to a colouring book and that the needle on your meter has receded a little.

For me, it is a sign of success when any industry, application or skill leaves the protective embrace of a few specialists and is delivered into the hands of a million amateurs.

Inevitably, with more people involved, some will want to know more and our next generation of cartography experts will emerge.

And more people making more maps will save more lives.

Return to the Homepage